Jullie Jay-Kanz, the former publicist of Joyce Blessing has debunked claims by the gospel musician as regards the payment of monies owed her.

Joyce Blessing whose marriage with Dave Joy hangs in a balance cursed Jullie Jay-Kanz for allegedly thwarting her progress despite making demands and subsequently receiving them. The singer accused Jullie Jay-Kanz of being the reason her contents keep getting flagged on YouTube and Instagram and warned her to desist from the act or face God’s wrath.

Reacting to the claim, Jullie mentioned on GhanaWeb TV’s entertainment review show ‘Bloggers’ Forum’ that Joyce Blessing told a lie because the singer has refused to repay a loan she took from her early this year. 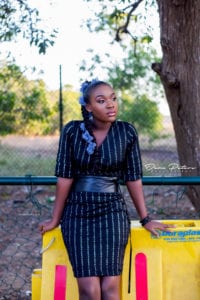 “She owes me. She borrowed from me and has not paid,” Jullie told host Abrantepa but refused to disclose the amount. “She took money from me to do something in February after divorce. When I asked her to pay me some months back, she told me she was not going to pay so she shouldn’t say she has given me everything I want when she knows she owes me.”

Jullie, however, revealed that Managing Director of the Despite Media Group, Dr Fadda Dickson Narh, gave her GH¢10,000 in his quest to settle the dispute between her and the gospel musician. This, she said, was meant to be a token for her three-year service for Joyce Blessing

“We went to Peace FM, some reputable people sat in the meeting to settle the issue. After settling the issue, she was supposed to pay me for my services. I worked with her for three years; I never received a penny from her. She and her husband employed me as a blogger but at a point, I was doing almost everything for her. I took other tasks upon myself. They were supposed to pay me 10% of every revenue that came from her brand because they didn’t have money to settle me at the time,” she claimed.

“At the meeting, she said she was going to pay me GH¢3,000 for my three-year service. We couldn’t build consensus so Fadda Dickson took it upon himself to give me GH¢10,000 so issues would go down,” Jullie added.

The former publicist vehemently denied allegations she has been thwarting the progress of the musician. According to her, she is not to blame for Joyce Blessing’s predicaments because she has been very loyal to the showbiz personality.

“I’m not involved in anything she’s said about me and she knows it. I’m not a bad person. When she didn’t have money, I worked for her as a sister so she should stop painting me black,” the blogger said without equivocation.

Be a friend, and you will have a friend. Give, and you receive.